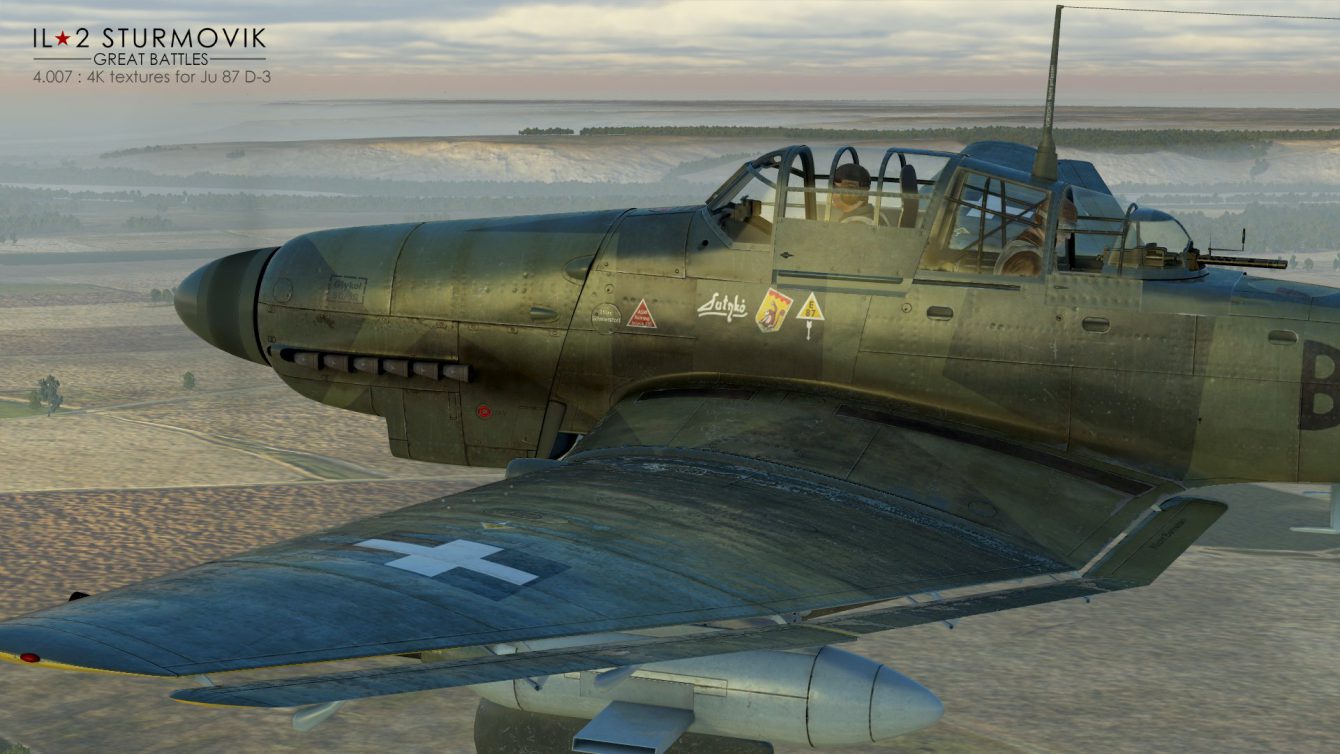 1. Ju 87 D-3 dive bomber has been upgraded to 4K external texturing thanks to Martin =ICDP= Catney, including two additional official skins;
2. Aircraft control systems DM has been upgraded. The probability of losing control in a certain control axis depends on the control wires or rods configuration of a particular aircraft and existence of a reserve control channel (or its lack thereof);
3. Workarounds for the remaining graphical artifacts on AMD cards (like black contour around the aircraft when viewed from its cockpit) have been implemented;
4. New multiplayer server option “Restrict Injectors” allows the server hosters to restrict access for users with graphics injectors like Reshade or 3dmigoto;
5. Five new mappable (RCtrl+NumPad_Del,1,2,3,0 by default) zoom commands have been added that allow quick zooming to various degrees (minimal, maximal and 3 intermediate levels). Zoom value set by a mouse or joystick axis or keyboard keys is not affected by the new quick zoom and after releasing a quick zoom button the FOV will return to the one set by an axis. These new commands work in either 2D or VR mode. The old ‘VR zoom’ command has been deprecated (its equivalent is the new maximum quick zoom, RCtl+NumPad_0);
6. There is a new setting in the Camera options that governs the speed of the new zoom commands;
7. Tank commander binoculars give three times more powerful zoom than before (they give a minimal FOV that is technically possible in the game);
8. The current FOV (Field Of View) value is shown next to the in-game FPS counter (that is activated by Backspace key by default);
9. Gunsight FOVs have been corrected for all tanks;
10. German fighter pilots of the Battle of Moscow, Battle of Stalingrad and Battle of Kuban have a new visual model and a sidearm during Summer (new Winter model, also with a sidearm, will be added later when it is ready). Because of this, the default camera position and user-customizable snapviews (.svc files) were changed on Bf 109-G14, Bf 109-K4, Me 262-A, Fw 190-A3, Fw 190-53, Fw 190-A8 and Fw 190-D9. The updater should overwrite the old files for these planes with the new updated ones for you, but in case this action was blocked by antivirus software on your PC and you see a wrong view in the cockpit of these aircraft in the game, please copy the new default .svc files for these aircraft from \data\LuaScripts\snapviews\defaults to \data\LuaScripts\snapviews manually. If you haven’t customized the view positions on other aircraft, you can just copy all the files from  snapviews\defaults to snapviews folder;
11. Bomb holders on both Bristol Fighters appear correctly depending on the ammo loadout;
12. Pedals on both Bristol Fighters appear correctly in a neutral position;
13. The issue that made the detached parts of Flying Circus aircraft invisible in the multiplayer has been found and fixed;
14. Fw 190 D-9 canopy glass appear correctly at medium distances;
15. Fw 190 D-9 oil on windshield visual effect has been restored;
16. Destroyed static KV-1 model won’t have white tracks when viewed from a distance;
17. Tank turret turn indicator won’t visually ‘jump’ when passing the back position;
18. APHE rounds stopped by the armor won’t damage outside objects;
19. Train wagons won’t appear detached from the locomotive in some missions;
20. Guest crew members in multiplayer will correctly hear the sound of the tank turret turning;
21. Guest crew members in multiplayer will correctly hear the sounds of the hatches closing or opening;
22. Certain HE rounds explosions can be heard from an aircraft cockpit;
23. The arm model has a correct sidearm in it in VR mode;
24. The arm model won’t drop a shadow when there is no body rendered;
25. The arm model has the correct size in VR mode;
26. Missing road segments that sunk inside the terrain have been corrected on Kuban map;
27. Random CTD in multiplayer fixed in case when other player tank have been spawned.