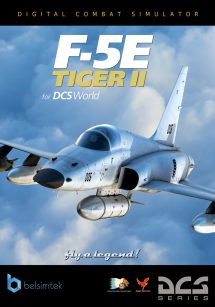 Belsimtek has recently released their fifth DCS module in early access form, the classic fighter F-5E. It is the little roadster sportscar of fighter jets for many: It is small, pilot friendly, and very agile. The F-5 has served many nations as a combat aircraft, and still serves many in various upgraded, or even vanilla forms. It also has became kind of a pop culture icon in form of fictional MiG-28 of TOPGUN fame…