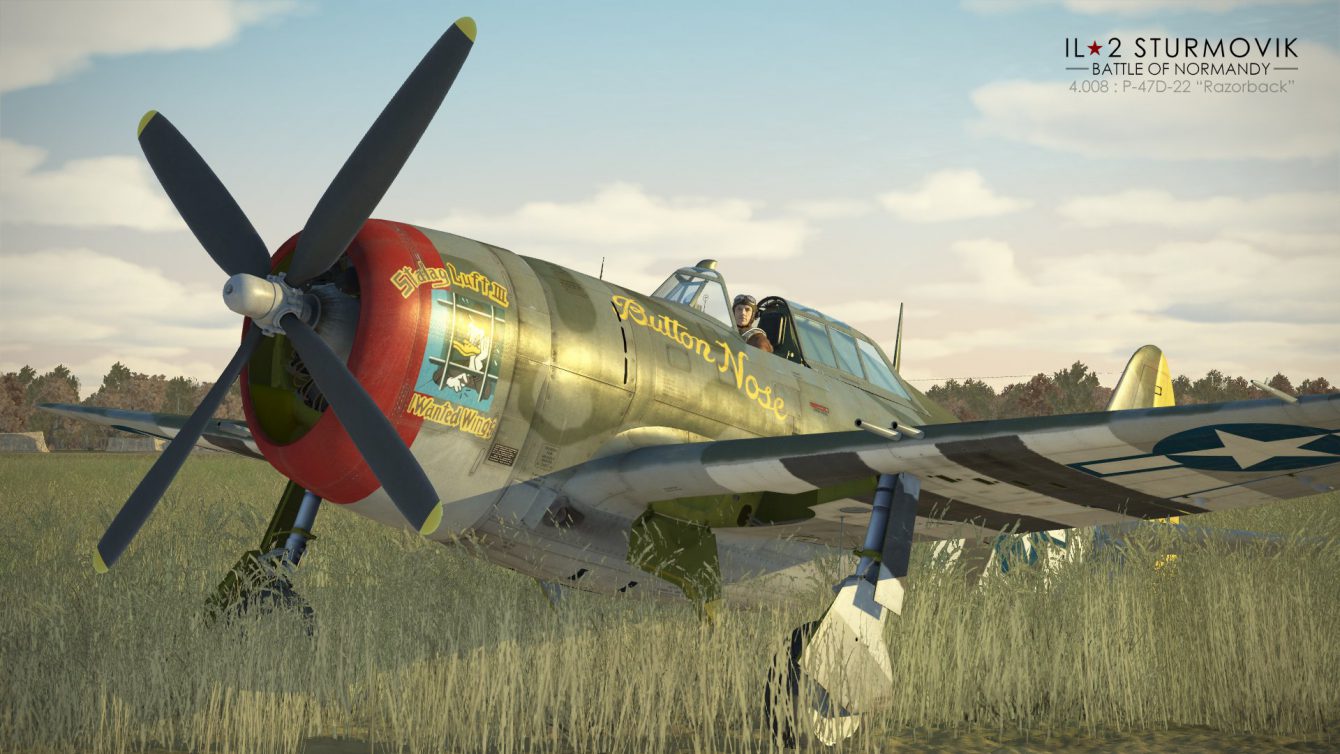 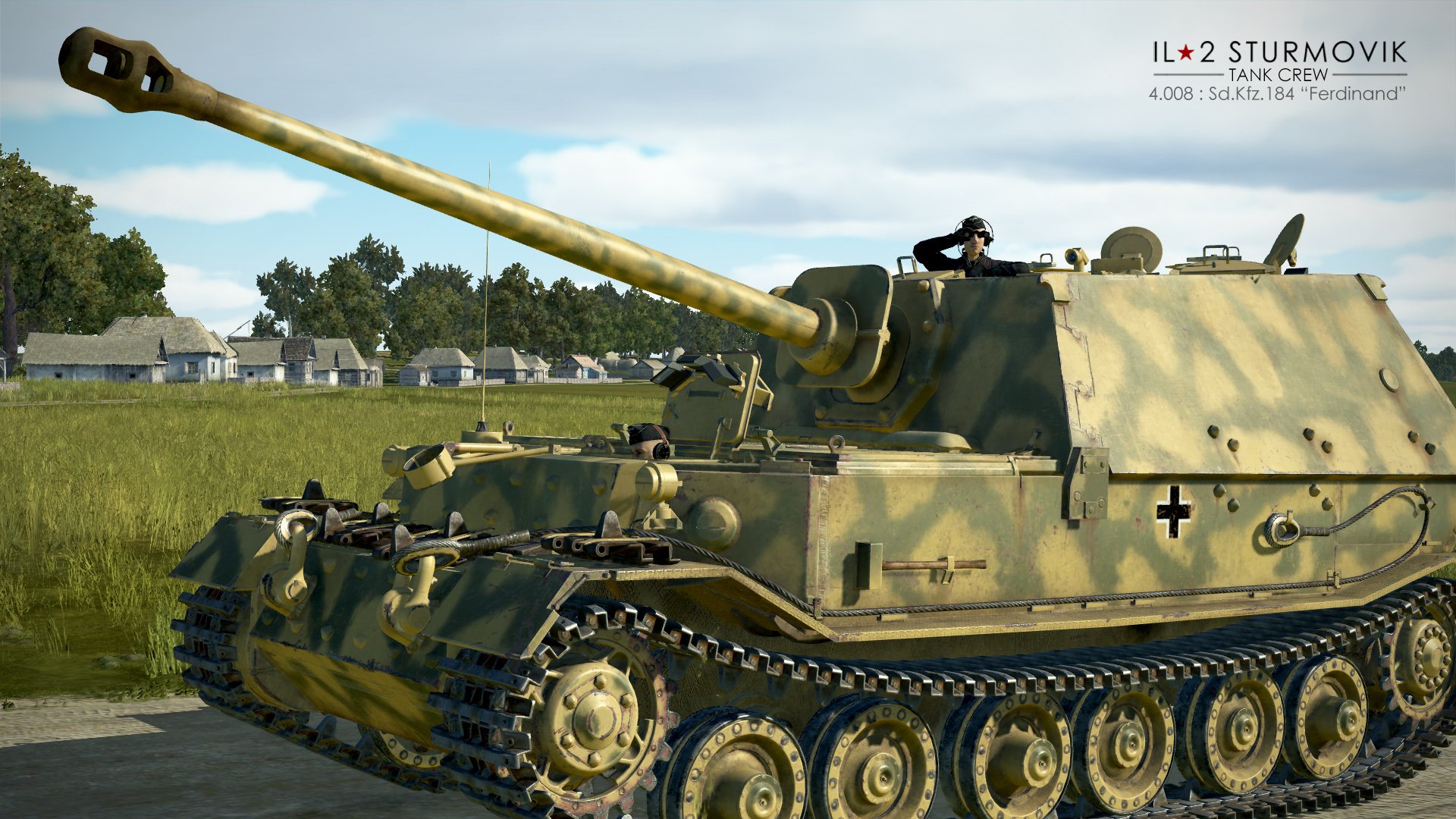 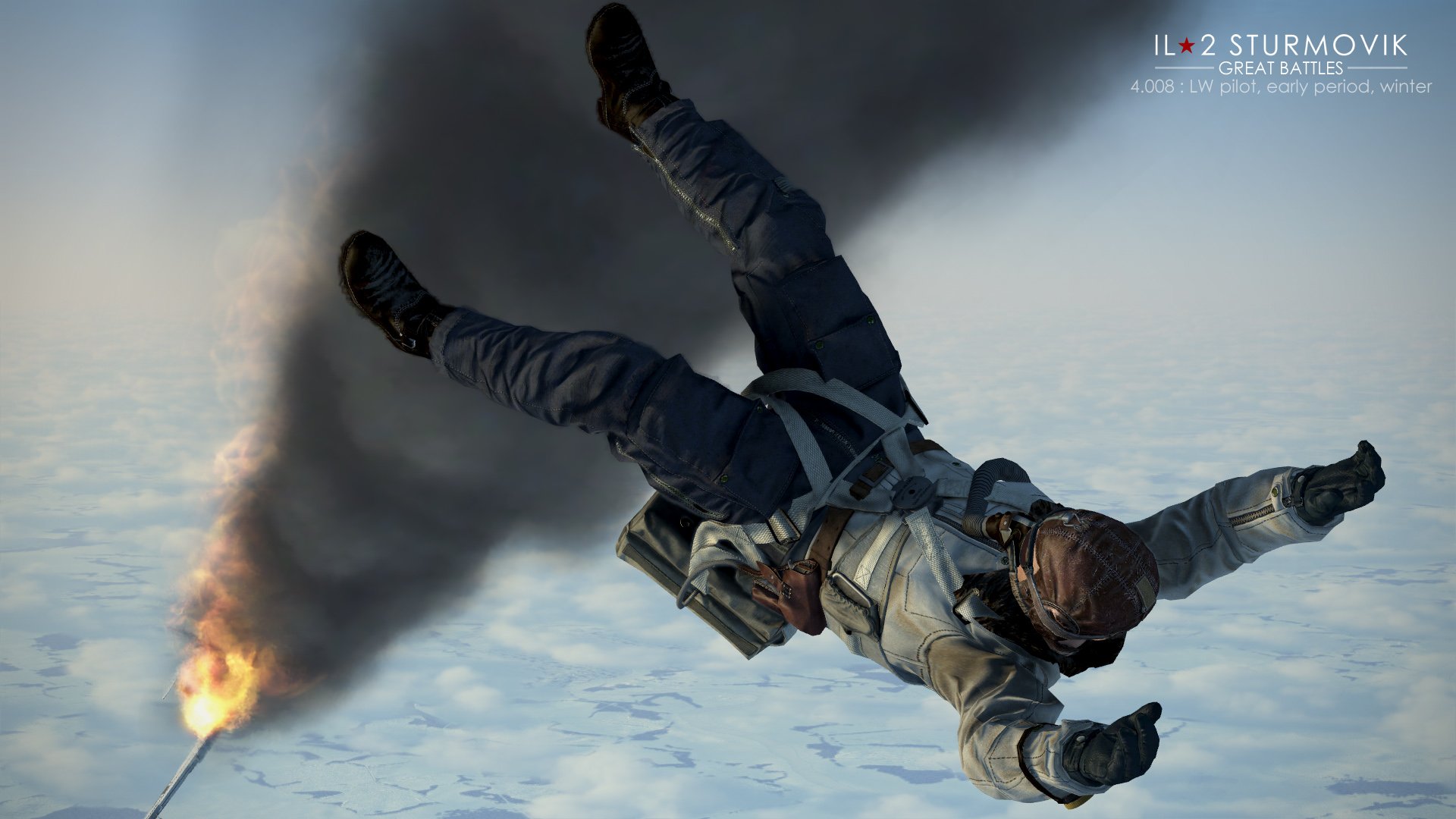 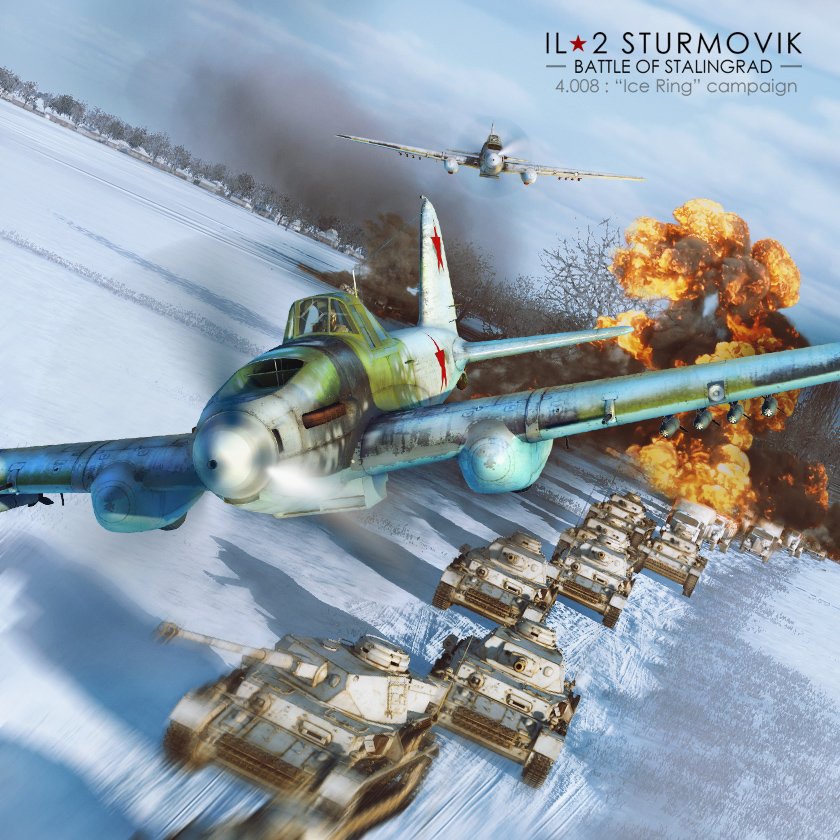 Main features
1. P-47D-22 “Razorback” heavy fighter is available to all customers who pre-ordered the Battle of Normandy. Early Access phase starts for Battle of Normandy project;
2. Sd.Kfz.184 “Ferdinand” tank destroyer is now available to all owners of the “Tank Crew” project, completing its 10 vehicles lineup; Official retail release of Tank Crew is TBD.
3. The new historical campaign “Ice Ring” is released and available for purchase (it requires Battle of Stalingrad);
4. Support for special SRS Radio voice comms app. The final version of SRS for IL-2 is still WIP by its author and will be released soon. We have created a special section in the forum dedicated to SRS instructions and discussions – check this link;
5. The 1941 IL-2 attack aircraft now has 4K quality external texturing thanks to Martin = ICDP = Catney;
6. The new model of the early war Luftwaffe fighter pilot in the winter uniform has been added for Battle of Moscow and Battle of Stalingrad;
7. The new model of a hand holding a pistol or flare gun in a 1st person view added for early war Luftwaffe pilot;

Aircraft improvements
8. In a multiplayer game, the next steps have been taken to eliminate the problem of invisible planes that appear only at the moment they start to shoot. Because reproduction of this problem is extremely difficult, please help: if you encounter this problem again, be sure to report it and attach a flight record to your message;
9. The option to leave a destroyed object in the game now works for aircraft (uncheck the “Delete after death” checkbox in mission editor);
10. P-47D-28 stall behavior has been corrected: the aircraft is less likely to suddenly stall at a beyond-stall angle of attack;
11. P-47D-28: damping moments have been corrected, resulting in the more inert and ‘heavy’ feel of controls;
12. P-47D-28 controls effectiveness has been corrected. The maximum roll rate has been reduced to correspond to the historical data. At high speeds (before the air compressibility effects kick in) the aircraft is more controllable along the roll and pitch axes. During the Mach-tuck the controls lose effectiveness making exiting a dive more difficult;
13. P-47D-28: maximum wing lift with extended flaps has been reduced;
14. P-47D-28 engine thermal model corrected (it became more resistant to overheating);
15. P-47D-28: the visual image of the rotating rotorhead has been improved;
16. P-47D-28: the problem with the rotation of the bent screw when using boost has been fixed;
17. P-47D-28: 150-octane fuel modification has been added;
18. P-47D-28 injection system corrected: when there is no liquid in the system left, the engine can’t be switched to WEP mode. The pressure gauge shows correct pressure in the injection system;
19. P-47D-28: the description of the aircraft and the related tips in the technochat were updated;
20. P-47D-28: the outside and inside sound mismatch has been addressed;
21. P-38, P-47, P-51, Tempest, Ju-88, Me-262:  landing gear doors of other players in multiplayer won’t stay visibly open;
22. Me-262:  landing gear doors in the hangar are now open;
23. P-51:  landing gear doors in the hangar are now open while the flaps are down due to the lack of hydraulic pressure;
24. P-38: antenna between the two rudders disappears when one of them is lost;

Player controllable tanks improvements
25. Crew members can be gradually poisoned with CO gas when firing the main gun with the hatches of the fighting compartment closed and ventilation turned off or damaged. M4A2, KV-1s, SU-152 the ventilation system is powered from a working main engine while on other tanks it is electric and won’t work with no electric power;
26. The engine won’t stop so frequently after a collision;
27. Tanks shouldn’t visibly ‘levitate’ above the ground;
28. A bug that reduced the actual number of shots for the main gun by 1 for each ammo type has been fixed;
29. A bug that caused the number of shells to be calculated incorrectly when one ammo type is spent (it did not decrease at first and then decreased by 2 after a next shot) has been fixed;
30. Driving along the shallow coastal part of the river is no longer like driving on a highway;
31. A toppled over tank won’t glide on a terrain slope like on ice;
32. A bug that could cause a detailed tank to explode multiple times has been fixed;
33. The effective destruction ranges of light vehicles have been corrected in HE shells descriptions;
34. Pz.Kpfw.VI ammo descriptions updated (trajectory drop and HEAT speeds);
35. Pz.III Ausf. M, Pz.V Ausf. D, Pz.VI Ausf. H1 starting procedure has been updated (the manual fuel pumping was replaced by an electric one with the addition of the required buttons in the driver compartment);
36. Pz.III Ausf. M now has a functioning fuel gauge (to the lower right on the bulkhead of the engine compartment);
37. Pz.III Ausf. M traverse indicator is now illuminated;
38. Pz.III Ausf. M and Pz. IV Ausf. G intercom Z18 parts are covered in self-luminous paint;
39. Pz.IV Ausf. G and Pz.V Ausf. D odometers have been corrected;
40. T-34-76UVZ-1943, SU-122 and SU-152 fuel and oil pipes color has been corrected (made less vivid);
41. The external tools attached to the German tanks were improved to look better, ground jack added for Pz.V Ausf. D;
42. Other changes and improvements to the German tank interiors;
43. The sounds of control levers, pedals and the hand brake are added to Tank Crew tanks;
44. Turning the SU-122 and SU-152 panoramic commander sight produces a sound;
45. Pz.IV Ausf. G and Pz.V Ausf. D odometers have been corrected indicate a change of direction;
46. A failure of one of the M4A2 engines now affects the instrument readings and the engine sound;
47. M4A2 low oil pressure indicator lamps have been corrected;
48. Sound of the M4A2 engine’s startup has been improved;

AI improvements
54. AI pilots won’t try to attack targets with the parameter engageable = 0 which could cause steep diving on a ground target with no chance of recovery;
55. AI pilots aim at air and ground targets better and the rockets and projectiles won’t fall short of a ground target at the beginning of a burst;
56. AI fighter pilots won’t chase its target too far from their assigned route or area of operations;
57. All AIs in a fighter group will attack a target (previously one of them could ignore it and follow its mates in a formation;
58. A rare random bug that could cause the AI gunner of a player tank to spontaneously rotate the turret at the beginning of the mission has been fixed;
59. A knocked off detailed AI tank (no marker visible and other AIs don’t see it as a threat) won’t continue to fire at targets sometimes;
60. When all the gunner visors of an AI-controlled detailed tank are damaged, it won’t track the targets and fire at them;

Other improvements and fixes
61. The residual inertia in the first-person non-VR view of the gradual zoom at maximum zoom and maximum zooming speed option when not using a mouse for looking around has been addressed;
62. The contours of objects against a clouds background have been minimized by using special tech;
63. The lowest cloud quality setting still causes significant artifacts on the aircraft visible against a cloud at near distances, but no longer gives an unfair advantage in spotting a distant aircraft;
64. The double triggering of onKilled events in the mission script shouldn’t happen again;
65. New training missions added for Battle of Moscow in the spirit of the real initial training of a MiG-3 pilot (Missions – Battle of Moscow – Migalovo training);
66. The recently found error on the Moscow map (the landscape height above the sea level was 50m less than it should) has been fixed – check this link;
67. The missing buildings at the Liege / Bierset A-93 2414/7 airfield on the Rhineland map have been added;
68. The poor-looking machine shop buildings in the industrial district of Belgorod (Prokhorovka map) were replaced with better ones;
69. The truncated or missing phrases of one of the USAAF air traffic controllers and RAF and USAAF forward observers were corrected;
70. The shimmering of very long railways on Kuban map that was visible up close has been corrected;
71. The look of the passenger and freight railroad wagon roofs has been improved;
72. Visual snow thickness increased on all winter maps;
73. The ground surface looks more detailed on all summer maps;
74. Selecting a random Entente aircraft in the duel on Arras map in QMB no longer produces a Bf 109F-4.